Beyond the Station Lies the Sea by Jutta Richter

A few years ago I asked my friend Carol about finding a new read aloud for my third grade class. I wanted to read something different. I have nothing against the cannon, but I knew there had to be more. She gave me some suggestions (I would not be the teacher I am without her!) and recommended that I also look on line. This began my life in the blog world. It reached a new level this year when I was lucky enough to be a judge for Cybils. As I have written there were some wonderful books nominated.

As we know the read aloud is the soul of the reading day. Our voice (someone else’s words) can bring laughter and tears to a classroom of listeners. That is why it is SO important to find the perfect story. Beyond the Station Lies the Sea by Jutta Richter is one of the books nominated I would love to read as a read aloud. Jutta Richter’s language (or the translators) is full of beautiful imagery. I could not put it down. I am just not sure if it is appropriate for a third/fourth grade class. I am not afraid to push the limit with my kids. I know that kids can comprehend a lot more then they are given credit for. I’m not advocating reading Proust, Tolstoy, or Bellow but reading them books that push their thoughts is so important.

Beyond the Station Lies the Sea by Jutta Richter is stunningly written novella about a young boy that runs away from an abusive home. He befriends an older homeless man. They dream of moving to the sea, but to get the money to move Niner (the boy) must sell his guardian angel to a wealthy woman. She obtained her riches by being a prostitute. Here lies my dilemma, how does one explain to 9 year olds about some of these topics.

Book courtesy of the publisher.

The Last Newspaper Boy in America by Sue Corbett

When I was in the third grade we moved from Mexico City to Nogales Arizona. It was culture shock when we first moved to Mexico from Denver, but truly a bigger one moving back to the States. Nogales is a small border town about 60 miles south of Tucson. It was in Nogales that I had my first job. I sold the Nogales International in front of the Santa Cruz court house and library. Imagine a 9 year old toe head selling papers. I made pretty good money. My next endeavor in the newspaper business was home delivery of The Denver Post. To date myself it was delivered in the afternoon.
I can honestly tell you that even though the money was coming in it was an awful job.

I think my two experiences with newspapers influenced my reading of The Last Newspaper Boy in America by Sue Corbett. It was one of the books I read for the Cybils Middle Grader Fiction. In the story we learn that it is a family tradition to deliver The Cooper County Caller. When a member of the David family turns twelve they take over the delivery job. However, on Wil David’s 12th birthday he finds out that they are going to stop local delivery of the newspaper. Through determination, civic duty, and a HUGE need for a computer Wil sets out to change the newspapers mind. I really enjoyed this story. It is another story of kids taking control of their lives. There is a lot of humor in the story, often driven by Wil’s older brother, Sonny. He seems unconcerned with the world. Oh, who am I kidding, he seems like a dolt. But we find out a lot about the David family by Sonny’s action. Another great read aloud.
at December 29, 2009 1 comment:

The Cyblis Shortlist and The mostly True Adventures of Homer P. Figg and now a NEWBERY AWARD HONOR!

Before you continue The Mostly True Adventures of Homer P. Figg was just awarded a Newbery Honor. Well deserved. 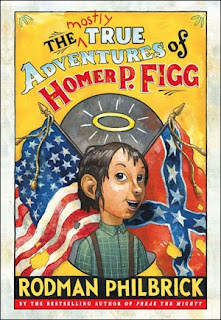 The Cyblis shortlist for the Middle Grade Fiction is on the way to the judges for the final round. I truly enjoyed being a judge. It was A LOT of reading. There are great books out there. We did notice that death and war seemed to be a common theme this year. That’s not a bad thing, just an observation. My criteria for books that made it on my short list was:

The final list will not be posted until 2010. That is so far away. Well, not really; but it seems that way. I plan on blogging about many of my favorites.
FULL DISCLOSURE!!! All the books came from the publisher or library, so FCC or FTC go after the bonuses of Goldman Sachs etc. Leave this teacher alone. The few books I received doesn’t come close to what a Goldman Sachs guy pays for a pair of shoes. Another point: in the coming days, before the final list is released, the books I blog about are not necessarily on that list. I know, hard to believe but we didn’t all have the same top lists!

The mostly True Adventures of Homer P. Figg by Rodman Philbrick is the story of Homer’s quest to free his older brother from the Union Army. You guessed correctly. This book has war and death, but it is a humors. Homer’s older brother Harold is sold illegally to the Union Army. During the Civil War wealthy people could pay someone else to take their place in the army. Homer sets out to free his brother. He has a tendency to stretch the truth, so he gets him self into some funny situations. I enjoyed this book because the historical information helps carry the story, but what I really liked was the perseverance of Homer to save his family and the honesty that Harold has with Homer at the end.