When I found out the Laurie Keller was going to share more of her humorous writing with us I was thrilled.  As most of us know reading teachers are notoriously non-thorough readers.  I say this because I originally went into The Bookies to buy it only to discover that it hadn’t been released.  I ordered and it came in and then sat on my TBR stack.  I took my niece to a swim meet last Friday, so I took The Adventures of Arnie the Doughnut Bowling Alley Bandit with me to read while I waited.  My parents and nephew arrived as the meet began.  Levi found the copy and that was that.
He sat reading it to himself and aloud to my dad.  As a new first grader he will have NO problems with fluency.  He was so excited to learn what a whoopee cushion is.  I’m sure his teacher will be thrilled.

The new Arnie book is an illustrated chapter book.  What is important about Laurie’s books is her use of multi-level texts.  There is the direct text that is easy for the reader to follow. Then, the reader has to notice everything else on the page because the tiny bubble speech might be crucial to the story, or there is a whole page comparing the weight of the doughnut to a bowling ball with Albert Einstein looking on saying “Impossible!”.

As with the Lunch Lady series I foresee begging, “borrowing”, and long lines of students waiting to read this book.  I can’t wait for the next one.
at July 24, 2013 No comments: 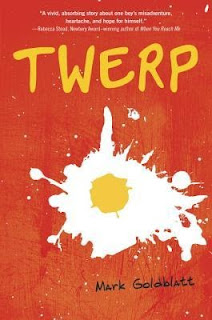 I’ve written about bullying in the past.  I shared how it impacted me and how it still damages kids today.  A few years ago a school psychologist did an anti-bullying program with my class, and it was one of the most effective ones.  He talked about how there are multiple types of bullies.  There is “the bully”, the one that actually does the deed or thinks it up.  There is “the posse”, the ones that help or follow; and finally, the spectators.  We all know them they are the ones that just watch and do nothing. The posse and the spectators give the bully power!

Recently Random House sent me a copy of Twerp by Mark Goldblatt.  It is a story about Julian Twerski.  He is the sixth grade and was suspended for a week for an action he doesn’t want to think about.  Twerp is set in 1969.  Julian’s English teacher tells him he can get out of a Shakespeare assignment is he writes a journal of his life.  He eventually fills over 10 composition books.  While we read his entries we learn a lot about this young man.  Julian is gifted, and that doesn’t sit well with his best friend.  We, also, find out that, his best friend, Lonnie is the true bully.

I am not going spoil the ending, but as time goes on it is easy to tell that Julian is a major part of the posse.  His misguided sense of loyalty to Lonnie gets him into more trouble than he deserves.  During my time with Julian I got very angry with him, and almost gave up on him; but I knew there was something in him that made him special.  I am my no means defending his actions, but I believe that his empathy will guide him away from Lonnie.

Here’s the deal.  This will be a powerful read aloud for 5th grade and 6th grade classes.  It will allow for discussion on making right choices even if it goes against the wishes of friends. I would put in a fourth grade library, and share with mature third graders.