Fake Mustache or, How Jodie O’Rodeo and Her Wonder Horse (and Some Nerdy Kid) Saved the U.S. Presidential Election From a Mad Criminal Mastermind by Tom Angleberger 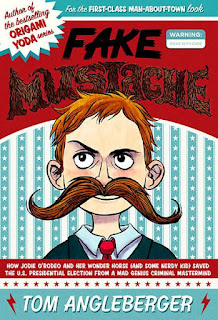 I, quickly, read Fake Mustache or, How Jodie O’Rodeo and Her Wonder Horse (and Some Nerdy Kid) Saved the U.S. Presidential Election From a Mad Criminal Mastermind by Tom Angleberger.  The title gives you a hint on how funny the book is going to be.  I laughed out loud the entire time I spent reading the book.  It ended up being the last read aloud of the year.  More on that later on.

The story is about a 7th grader named Lenny Junior, his best friend Casper Bengue, and Jody O’Rodeo,  a television star from a canceled show.  (Very Hannah Montana!)  Lenny’s friend buys a fake moustache, and sets out to take over the world.  Casper buys the moustache at Sven’s Fair Price Store, which sales many items from the Heidelberg Novelty Company.  (The company plays a big part of the story.)

From the beginning Casper sets up Lenny as the bad guy.  With a friend like that who needs enemies?   The mustache has the ability to brain wash people.  That is everyone except Lenny, Jodie, and Sven.  The antics to save the day are what make this book SO very funny.

As I said earlier I read this as my last read aloud of the year.  It’s funny we spend all summer trying to figure out the best first book, but because the end of the year is so frantic the last book is often an after thought.  To be honest I hadn’t given it much thought either.  After I finished Fake Mustache… at home I knew I had found the perfect book to end a VERY HARD YEAR.

Often when Read Aloud time is over kids beg for more.  Sometimes it is because they are enjoying the book, sometimes because it is a cliff hanger and they want to know what comes next, and sometimes because they know that we love to read and they don’t want to have to work.  You know what I mean!  What makes this a great read aloud is, of course it is hilarious, but it also gives us the upper hand during read aloud.  “Mr. Kimmal read more!”  “OK, one more chapter.”  It took them awhile to figure out that some chapters were less then on paragraph.

I loved Origami Yoda, but didn’t feel it was appropriate for third graders.  I still don’t think they get the true meaning of the story.  Even though there is crushing in this book it is done in such a slapstick sort of way that kids just groan, laugh and go on.

I have not blogged in a long time.  I finished my 15-year of teaching and it was one of the worst.  (My first year was teaching 7th and 8th grade Spanish at an urban school in Boston, and this was worst!)  I had a really tough class, a new principal, an administration that was challenging, and the topper, a team that was backstabbing and deceitful.  Our team spent five hour-long sessions with a mediator.  Many things suffered because of this.  I spent all my energy being positive in the classroom and at home.   I’m not sure what next year will bring. I have a new team, two first year teachers; and I know what to expect from administration.

I spent the first two weeks of the summer in France.  We took our moms to Paris and Bordeaux.  I ate well, drank well, and enjoyed being with people I love.  I am now ready to get back into the swing of things.