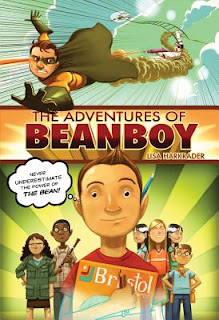 When it comes to superheroes, there are the loners like Superman, Spiderman, Aquaman, and Thor.  Then there are the ones with sidekicks.  The most famous being Batman and Robin.  In Lisa Harkrader’s wonderful book The Adventures of Beanboy the world is introduced to the next major sidekick.  Tucker MacBean’s life is in turmoil.  Tucker is a seventh-grader trying to make it in life.  His recently divorced parents are not so pleasant to each other.  His younger brother has special needs.  His mom works too much, and is overwhelmed with getting her degree. A girl named Sam bullies him, and to make matters worst his favorite comic book is not being published for months.

As he finishes the final issue of the comic he reads about a contest the publisher has to find the perfect sidekick for the superhero.  The grand prize is a scholarship to university.  Tucker sees this as the solution to all his problems.

The Adventures of Beanboy is quirky.  What made this book so enjoyable were the relationships between the characters.  Tucker grows emotionally during this turbulent year.  He learns that his actions greatly impact those around him, and appearances can be very deceiving.  There are touching parts when Tucker realizes why his archenemy and tormentor acts the way she does.  There are funny parts. Let’s get real the superhero is called Beanboy, so you know what the superpower has to be.

In my opinion this is a fourth grade and above book.