Better Nate Than Ever by Tim Federle

A couple of weeks ago we did a team building activity at school.  (Yes, in March…)  Anyhow, it was a fun way to work with a group.  We had to list 20 things that we love/make us happy, another list of something, and five dream jobs we would do it we could.  It is risky sharing these jobs.  These are things we want to do, but maybe probably lack the skills to actually do.  Since I was a kid my dream was to be a Broadway star.  Sing, dance and win a Tony.  To be totally honest I lack everything to be able to do this.  I can’t sing, trust me or ask around.   I can’t dance; it’s not that I have two left feet they can’t even find the beat.  Of course I do perform daily.  I am a supporting actor and get to share center stage with 26 very dramatic characters. You’re always welcome to catch my daily matinee. 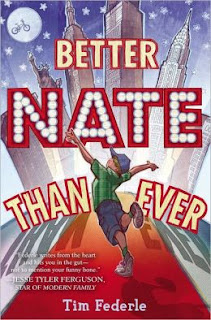 Every Sunday I read the New York Times Book Review.  Recently, there were two middle grade books reviewed about the theatre.  Better Nate Than Ever by Tim Federle perked my interest.   I decided that since there were 22 books on my to be read stack I would get a new one to read instead.  Please, don’t even try to figure out the logic to that!  Well I’m glad I did.  It was a gritty and charming story of Nate’s guest to be what I will never be:  a Broadway STAR!

Nate’s best friend Libby finds out that there are auditions for the musical version of ET.  Together they plan his escape from his small town outside Pittsburgh to New York to audition for a role.  Life for Nate is not easy.  He is over weight, and, well, he sings show tunes all the time.  Not the easiest way to survive middle school.  His parents fight all the time and his brother calls him the same names he is called at school.  Who wouldn’t want to escape?

Once Nate arrives in New York he works very hard to reach his dream.  Along the way he meets his estranged aunt and her roommate and discovers the importance of family.

Middle Grade classification!  Publishers have to lump books together.  It helps all of you know where to start, but sometimes just putting them in a category isn’t enough.  Better Nate Than Ever is listed at a 9-13 year old book.  There are nine year olds that will enjoy this book, but putting it in a fourth grade classroom library is doing a disservice to a wonderful book.  This book should have book talks in 5th, 6th, 7th, and 8th grade classrooms and libraries.  Student’s dreams must be fostered, and allowed to bloom.  Given what is dominating media coverage this week gay students must have books that show that they are OK.  Luckily, Tim Federle wrote a book that will help many of these kids see that it will get better.
at March 27, 2013 1 comment: Links to this post 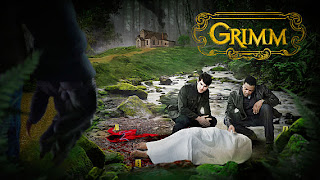 NBC’s Grimm is one of my favorite shows.  The show is an updated version of the Brothers Grimm. During the first episode the viewers discover that Nick Burkhardt, a Portland detective, is actually a Grimm.  For centuries Grimms have battled the evils.  As a Grimm, Nick can see what creature is really hidden behind the façade of a human.  It is this play on old stories that are so fun to watch and read.

Recently I received an advance reader’s copy of 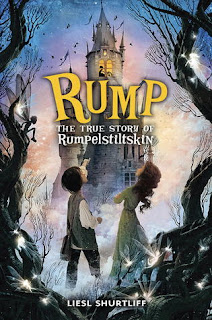 Rump The True Story of Rumpelstilskin by Liesl Shurtliff.  Now any play on the word butt is going to get a boys attention.    This book definitely does not disappoint.  Rump’s mother died during childbirth.  Her last partial word was her new babies name….Rump!  I mean how sad?  She died before even saying his whole name.  In this magical land little gnomes run around announcing the name of newborn babies.  It was hard growing up and being the butt of so many jokes.  (Sorry I couldn’t help it.)  It is a hard life for Rump and his grandmother.  He must work in the gold mines all day, there is little food, and he is bullied non-stop.

Rump does have a friend named Red.  Her grandmother lives in the forest.  See another twist to the old stories. As Rump gets older he discovers that he can spin straw into gold.  This of course leads to many bad times for the two friends.

I am not going to give away more about the story because you need to have fun reading it. I am ordering a copy this week for the classroom, so that it gets passed around and read by kids.  Rump is filled with humor, no parents, evil people, magic and more humor.  It has everything a boy read wants, and needs in a book.

Too often books based on old stories get lost in trying to take themselves too seriously.  Ms. Shurtliff has fun, and that is why I REALLY enjoyed Rump The True Story of Rumpelstilskin.