Over the summer I read Escape From Mr. Lemoncello’s Library by Chris Grabenstein.  I loved it.  It was difficult to put down.  To be honest, I was a little jealous of Kyle in the book.  It would be fun to be part of the gang that got to spend time in the new library.

Mr. Lemoncello is a wealthy man that builds a state of the art library in his hometown.  The original library closed due to budget cuts, and the citizens had been without one for years.  Kids from the local school wrote an essay on why they should be the first to spend time in the library.  Kyle (the main character, not me!) wins and can’t wait to win the grand prize, so he can share it with his family.

I was asked if I wanted to interview Chris Grabenstein, and of course, I jumped at the chance.  Below is out intervlog.

I want to begin by welcoming you to The Boy Reader, and taking time out to share your thoughts with the blog world.  I loved Escape from Mr. Lemoncello’s Library, and I can’t wait to share it with kids.  My favorite is the name of the main character.  Kyle is such a great name!

One of my favorite names of al time, too!

If you don’t mind, I thought I would group some questions into some about the book, and some about your writing process.

·      One of the things I loved about the book are your references to different authors and titles.  Some I knew, some I didn’t (I didn’t know Sondheim wrote a book.)  How did you decide which authors and books to include in the book?

I guess I more or less worked backwards.  First, I determined what I needed the clue to say or convey.  Then, I went on a search for a book that would work.   I had lists of books cluttering my desktop -- Newbery Award Winners, the Top Middle Grades Books Of All Time, Classic Children's Books, etc.   When I gave Mr. Lemoncello the verbal "tick" of dropping classic titles into his everyday speech, I was on the lookout for any chance to slip in another title...but without overdoing it to the point that it became annoying.   When the paperback comes out, there will be a (quite long) list of all the books mentioned in the book.

Some of the book titles I just made up.   The names of those books' authors came from charity auctions where we raised money for worthy causes by granting  character naming rights in an upcoming book to the highest bidder.

·      There are a lot of different types of games in the book.  The characters play video games and traditional board games.  Are you a gamer?  What games did you play growing up?

Yes, I am a gamer.  I grew up with four brothers.  The five of us played board games all the time -- especially on rainy days in the summer.   The line in the book from Kyle's mother, "If you're bored, play a board game" is what my mom said to us.  Growing up, we played a lot of Monopoly, Risk, Stratego, Sorry, Clue -- I think my brothers and I kept those Parker Brothers in business.   My two older brothers got into those very complex military strategy games.  I moved on to Scrabble.

I based Kyle's character on that sliver of my own personality that remembers how great it felt to beat my two big brothers at ANYTHING -- which was only possible when we were playing games with rules.

When I did improvisational comedy, we did a series of "theatre games" where we made up scenes, stories, and songs on the spot from audience suggestions.

·      The world’s most famous librarian is wonderful.  Who is Dr. Yannia Zinchenko based on?

Dr. Zinchenko's name comes from a librarian friend who helped me research some of the details in the book (like the Dewey decimal numbers for any titles I created).  Her character, however, is a total figment of my imagination.  I guess I wanted to make her the complete opposite of the stereotypical librarian, the one you see parodied in the Nancy Pearl Librarian Action Figure toy with push-button Shushing Action. 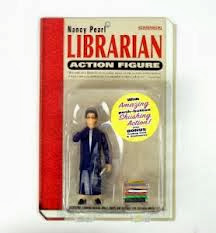 The Librarian Action Figure became the model for Mr. Lemoncello's holographic librarian from the 1960s.

·      As the kids figured out how to win they automatically formed groups.  It is cool that this seemed to flow so easily and realistically.  Did you plan that originally?

Yes.   I think one of the strengths of a library is as a place where collaboration and teamwork can easily take place.   One new YA Library outside Chicago that I visited recently even had "collaboration stations" where teams of kids could work on a project together.  Libraries become that third space where we can solve problems together.   A big theme of the book is the sharing of knowledge, which implies team work.  As Mr. Lemoncello himself is famous for saying "Knowledge Not Shared Remains Unknown."

·      Will there be more adventures with Kyle and Mr. Lemoncello?

My next book with Random House, THE ISLAND OF DR. LIBRIS, about a boy who discovers a mysterious island where all the characters he reads about come to life, is more of a "companion piece" to MR. LEMONCELLO'S LIBRARY.  However, since everybody really seems to like Kyle, Mr. Lemoncello, and the extraordinary library, I have started thinking about doing a sequel -- maybe we'll call it LOST IN MR. LEMONCELLO'S LIBRARY.

·      The setting of is in a wonderful library.  I am fortunate to live in Denver with a fantastic main library designed my Michael Graves.  The voters of Denver are very supportive of libraries and have funded the building of new neighborhood libraries.  Unfortunately, I know many communities are not like Denver.  Do you think libraries are a dying institution?

No!  I have seen some marvelous libraries in my travels as an author.  They, like Mr. Lemoncello's Library, are more than a repository for books and information.  They are vibrant community and cultural centers.  A place where kids can have fun learning.  Where those without high-speed internet access can surf the web.  I think libraries are in transition.   They are poised to become much more important "community centers."

·      Teaching writing is one of the hardest subjects to teach.  I am constantly trying to share information with my students about how writers write.  Can you share your writing process?

My writing process is to write every day.   I sit down in the morning, aiming to write two thousand new words.   I start the day lightly editing the previous day's two thousand words and then, working with a loose outline, push forward.  A former improvisational comedian, I tend to make my scenes up as I go.  Like Robert Frost said, no surprise in the writer, no surprise in the reader.    This is how I create my first draft.  Then, I go back and rewrite everything maybe a dozen different times.   It took us two years to get Mr. Lemoncello to where we were all happy with it.   But, all those revisions and rewrites certainly seem to have paid off!

Thank you for your time.  I haven’t decided if I’m going to do this as a read aloud or do with a small group or do as a Guys Read book club group.  I do know that I can’t wait to share this with students, and hear what their comments.

Again thank you for an enjoyable book and answering my questions.
Kyle