I am a little slow on the uptake.  The buzz about The Hunger Games series has been going strong for awhile, but I just recently finished reading all three.  It made me really think about age appropriate books.  My hope is that this post won’t be too rambling.  To begin with I teach third grade and a big chunk of my class read at a high fourth grade or higher reading level.  I push the envelop in the books I read aloud, do in guided group and have on the shelves of the class library.  I believe censorship is one the most damaging acts done to democracy.  I don’t understand why as a society it is alright for there to be very violent shows on TV and at the movies, but The King’s Speech is given an R rating because one bad word is repeated numerous times.
With that said I DO NOT think every book should be put in any hand of a kid wanting to read it.  The Hunger Games series, The Strange Case of Origami Yoda and the last few books of the Harry Potter series are just a small of example of what I mean.  (I won’t mention the Twilight series because my kids aren’t even talking about them. Thank god!)  I will start with the Strange Case of Origami Yoda.  I love this book.  I love the way it is written.  I love the characters.  I love the message is sends.  I love it.  I love it for mature fourth graders and for an entire class of fifth graders.  In my opinion it is not for third grade boys.  It is not a challenging book and because of this the publisher is marketing it for boys.  I have talked to a few boys walking around with Origami Yoda finger puppets about the book.  I have asked them what they liked about the book.  They respond, “It is so funny. Do you like my finger puppet?”  “What did you think of the end with the dance?”  I ask.  “Oh, I didn’t like that so I didn’t finish it.”  UM that’s what the book is about, boys liking girls and girls liking boys.
My first read aloud of the year was Harry Potter and the Philosopher’s Stone.  I realized that many of these kids had never heard the first book or even read it.  Many students in class were so engaged that they went on to read more of the series.  From the beginning I told them that if it was an appropriate reading level they could read it in class.  A couple of my highest readers want to read the last two books.  I do not have copies of them in class because they aren’t appropriate for third graders.  JK Rowling wrote the books fro kids to grow up with not for third graders to read all seven in one year.  There have been many days where nine year olds are mad at me.  I have told them and their parents that if the parents want to get them for their kids it is their choice, but I would need a note saying it was ok for them to read it at school.  To date no parent has done this.  I tell D “dude just wait until your older.  You will enjoy them even more because you will understand everything that is happening in the book.”  He still thinks I’m being a mean teacher.  He’ll get over it.
I devoured The Hunger Game series.  I downloaded all three when I got my iPad and read them non-stop.  They were interesting and have a social commentary that is important for adults to read and understand.  I had a student last year that in third grade read at a high school level and could easily done 6th grade mathematics.  He is a very smart kid.  He is funny, but not always socially in tune to what is happening around him.   The other day he was reading Mockingjay.  I said “N do you think that is a good book?  Is it appropriate for you?”  “Oh yea.  I loved the first two.”  “I don’t think those are appropriate for you.  Does MS. T know you are reading them?  Do your parents?”  I ask.  He replies that they all know.  This blog post is about my opinion on books kids should read not on the fact that his fourth grade teacher doesn’t read kids literature.  She says she doesn’t have time.  Enough said.  However, N’s parents are usually more involved in what he is reading.  I saw his mom the next day and I asked her if N spoke to her about what I said about his reading choice.  She said no.  We talked about why I felt the way I did.  That night she and N talked about the books.  N is not very mature and I still believe he doesn’t truly understand what he read.
The reason books are challenged or banned is because they are powerful.  As teachers we need to use this power for good and as important learning tools. I stride to keep an open dialog with my students about appropriate books. I look for books that will push them academically and socially.
at March 30, 2011 12 comments: Links to this post 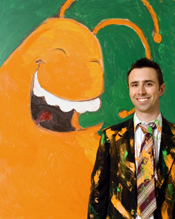 A few weeks ago Denver was visited by a great kids author and overall really nice guy.  We welcomed Jarrett Krosoczka to the Mile High City.  He was in town doing a few days of school visits.  While in town he made a stop by the Tattered Cover on Colfax.  I still have a hard time going to this Tattered Cover.  It has nothing to do with them as a bookseller.  The space is well merchandised and truthfully it is very close to my home and I drive by it daily on the way to school and from school.  I just missed what used to happen in the building.  I don’t think I will ever get over the fact that Denver didn’t support the Bonfil’s Theatre.  As a teen and 20 something I spent a lot of time watching my friends preform there.
OK, sorry back to Jarrett.  I met Jarrett a couple of years ago at the CCIRA conference when I was lucky enough to be his host for the day.  He still thinks I accidently lost him, little does he know….  It was right before the first Lunch Lady book came out.  I received an ARC at the ALA Mid-Winter conference, which he signed.  He let me read the galley of the second Lunch Lady.  I spent the day laughing.  It was a wonderful day.  Over the years we have kept in contact through the blog world, Facebook and Twitter.  So when I saw he was coming I planned my schedule around seeing him.  He really knows how to pull in an audience.  He has a group of preschool and kinder girls singing and acting out the Lunch Lady.  My friend Lauren and I got there early and were able to visit with Jarrett for a while before his talk. 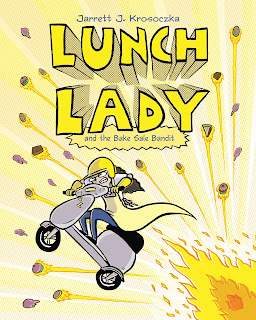 In the classroom Jarrett is in much demand.  The Lunch Lady series makes a constant round of book boxes.  It is a graphic novel series that is popular with both boys and girls.  For a reward for good behavior I showed them the video for Punk Farm.  For a week kids walked around singing the punk version of Old McDonald.
Thanks Random House for the free copy.
The new REM album is quite good.  I am listening to it this morning while writing this. (Nothing to do with this blog!)
at March 29, 2011 1 comment: Links to this post

I.Q. By Roland Smith and the Book Fair 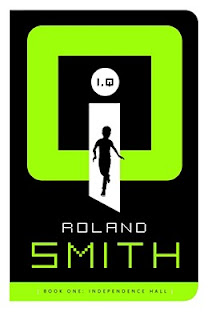 Our most recent book for Guys Read was I.Q.  Book One:  Independence Hall by Roland Smith.  Most of the guys read the book and really enjoyed it, as a matter of fact I had a copy of Book Two I received for the Cybil’s Award; so I raffled off first reader.  The book is somewhere at school in the hands of a boy.  Last week was our Scholastic Book Fair and there were a limited number of copies of I.Q. Book Two.  Needless to say they went very quickly.  I went in to get one, but no luck.  It was funny because a parent volunteer said to me “Why is that books so popular?  You’re the third person to ask for it in the last five minutes.”  I explained that the first one in the series had been a Guys Read book.  An odd look appeared on her face.  She does not have a son in Guys Read, so she didn’t quite understand how 26 boys can get about a book they like.
To be honest Guys Read Book Club has been a challenge lately.  During the first three years there was always at least one guy in each grade that was a reading leader.  He motivated his peers to read.  Unfortunately, this year there is no true reading leader in the third grade class.  Most show up without even reading the first chapter.  The older boys are getting frustrated and so am I.  I have decided that when we get back from spring break I am going to meet with the third graders and lay it on the line.  Hopefully, the directness and honesty will get them to take the club seriously.
What is hard about all of this is that the whole mission on the club is to have fun.  I have always told the boys that they are welcome even if they haven’t finished the book.  The third grade cohort interpreted that to mean that they don’t need to try, but still come and be goofy.  Hopefully this works.
I.Q. Book Two was sent by the publisher.
at March 28, 2011 No comments: Links to this post